This game was released on September 25, 2020 and is no longer available to pre-order. Any incentives that were offered are listed below.

Port Royale 4 is a trading and city-building sim set in 17th-century Caribbean. The player takes control of a small colony and grows it into a bustling city by developing production chains, creating trade routes across the sea, battling fleets of rival nations, and fending off pirates.

In a departure from the previous installments, PR4 features turn-based naval battles. The player may choose to represent England, France, Spain, or the Netherlands, each providing different benefits and gameplay styles. The game includes over 60 cities, 50 different buildings, and 18 historically authentic ship types.

Digital pre-orders for Port Royale 4 are currently discounted by 10% across Steam, Microsoft Store, and PlayStation Store, although in the case of the latter, the discount is only granted for PlayStation Plus members.

Pre-ordering for PC additionally grants instant access to the closed beta, which includes the following content from the upcoming game:

The Steam version is priced at $49.99 and the console versions at $59.99 before any discounts. 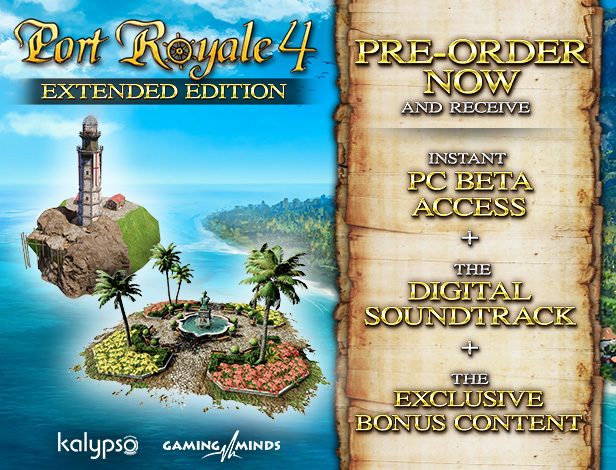 Port Royale 4 also comes in an Extended Edition that adds the following extras on top of the base game:

The Steam version of the Extended Edition costs $54.99 while the console versions cost $64.99 before any discounts are applied.

Port Royale 4 is developed by Gaming Minds Studio and published by Kalypso Media. It is scheduled to launch September 25, 2020 for Nintendo Switch, PlayStation 4, Xbox One, and PC via Steam.