RAGE 2 is an open-world shooter set in a post-apocalyptic wasteland brought on by an asteroid collision which annihilated 80% of Earth’s population. Co-developed by id Software and Avalanche Studios, the game utilizes the latter’s proprietary Avalanche engine to bring its dystopian world to life.

According to the publisher Bethesda, RAGE 2 features brutal vehicular combat (allowing the player to pilot anything from monster trucks to gyrocopters), extensive range of upgradeable weapons, devastating Nanotrite powers, and Overdrive mechanic which rewards aggressive gameplay. There is a plethora of environments to explore, including treacherous swamps and overgrown jungles, as well as numerous factions which wage war for control of the wasteland. 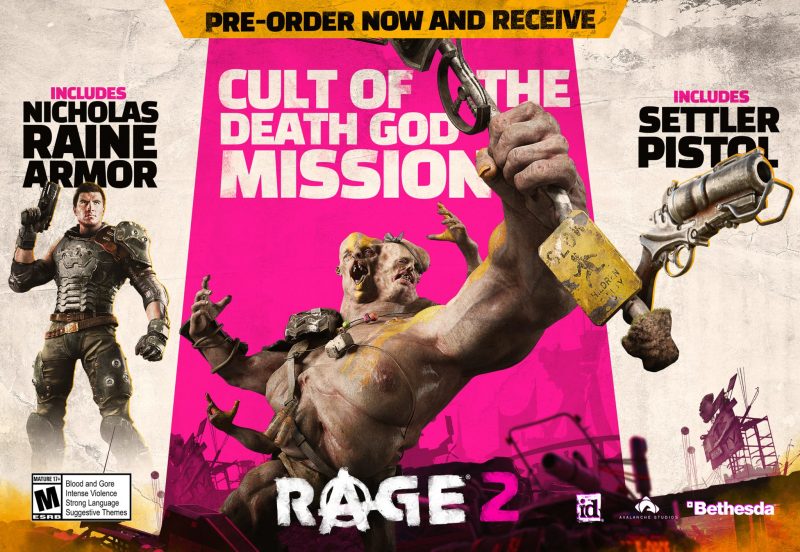 The mission will have to be completed in order to receive the bonus items, as per the official quote:

The exclusive mission sends protagonist Walker after a cult of crazed mutants who have taken to worshiping the image of Nicholas Raine, the hero of the original RAGE. Survive the sewers and fight through hordes of mutants – including the monstrous Abadon Warlock – to receive Raine’s legendary armor along with the fan-favorite Settler Pistol and the new Mutant Monster Truck.

Secondly, all pre-orders also get the recently-announced “He’s on Fire” cheat code, which when enabled adds in-game commentary by Tim Kitzrow of NBA Jam fame. Watch the trailer below:

Lastly, there also are some retailer-exclusive bonuses on top of everything listed so far:

The premium editions of the game are detailed below. The Deluxe Edition is available both physically and digitally, and contains in-game items to “add a little luxury to your action-packed tour through the wasteland”: The Collector’s Edition includes all the aforementioned Deluxe digital bonuses, plus a Steelbook, a poster, and most notably a talking, singing mutant head you can mount on your wall: