This game was released on January 29, 2021 and is no longer available to pre-order. Any incentives that were offered are listed below.

Re:ZERO -Starting Life in Another World- The Prophecy of the Throne is a visual novel-slash-tactical RPG based on the popular anime and light novel series by Tappei Nagatsuki. While centering on the Royal Selection arc from the first season of the anime, the game features an original storyline that deviates from canon and has a mysterious sixth candidate join in the struggle for the throne. The story is overseen by Re:ZERO‘s author, and the new characters are designed by the original artist Shinichirou Otsuka. Pre-order Re:ZERO – The Prophecy of the Throne or buy it at launch to receive a limited-run Day One Edition containing 4 exclusive pins in a display box. The pins depict Emilia, Subaru, Rem, and the new game-original character, Melty. Since the bonus is limited to physical editions, you can only get it with Nintendo Switch and PlayStation 4 copies of the game.

The game’s standard and Day One Editions cost the usual $59.99, and there is also a Collector’s Edition detailed below. 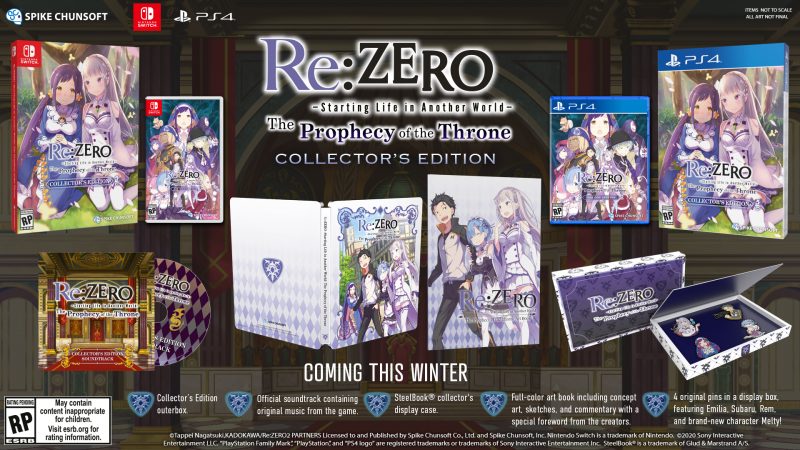 The Collector’s Edition of Re:ZERO – The Prophecy of the Throne includes the following extras:

Re:ZERO -Starting Life in Another World- The Prophecy of the Throne is scheduled to launch on January 29, 2021 on PlayStation 4, Nintendo Switch, and on PC as a digital-only Steam release.