This game was released on September 19, 2017 and is no longer available to pre-order. Any incentives that were offered are listed below.

NBA 2K18 is the latest installment in 2K Sports’ bestselling basketball game series, developed by Visual Concepts for current- and last-gen consoles as well as PC. It will be the first NBA 2K title to be released on Nintendo Switch. One of its most notable features is the new “Run The Neighborhood” shared-world career mode.

The game has two premium editions: Legend and Legend Gold, which are available for PlayStation 4, Xbox One, and Nintendo Switch platforms digitally and at retail. Both of these editions feature Shaquille O’Neal on their covers, while the standard one features Cleveland’s Kyrie Irving. Similarly to the previous installment, pre-ordering NBA 2K18 gets you the “Early Tip-Off Edition” with the following:

The bonuses are not available for last-gen (Xbox 360 & PS3) consoles, however. 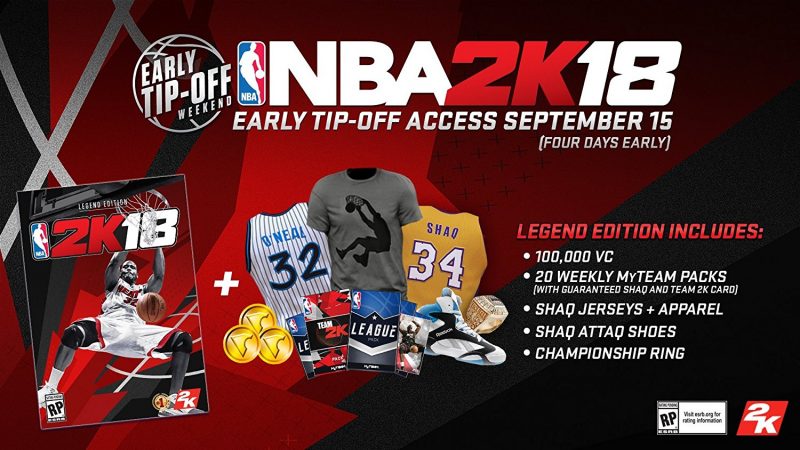 The $99.99 Legend Edition comes with the following: The Legend Edition Gold brings the price up to $149.99, and adds these items on top of the base game:

The physical version of this edition is exclusive to GameStop.