This game was released on March 15, 2019 and is no longer available to pre-order. Any incentives that were offered are listed below.

The Division 2 is an open-world, online-only shooter with RPG elements developed by Massive Entertainment and published by their parent company, Ubisoft. Compared to its predecessor, it is larger in scope and scale, and provides more end-game content and character customization. The latter includes Specializations – a new form of progression unlocked after completing the main campaign that grants your agent access to elite weapons and Sharpshooter, Demolitionist, or Survivalist skill trees.

The game takes place in Washington D.C., which like Manhattan – the setting of the first title – was decimated by the Green Poison virus and the ensuing mass panic. It is up to the members of the Division to retake control of the city from the numerous enemy factions that are vying for power. 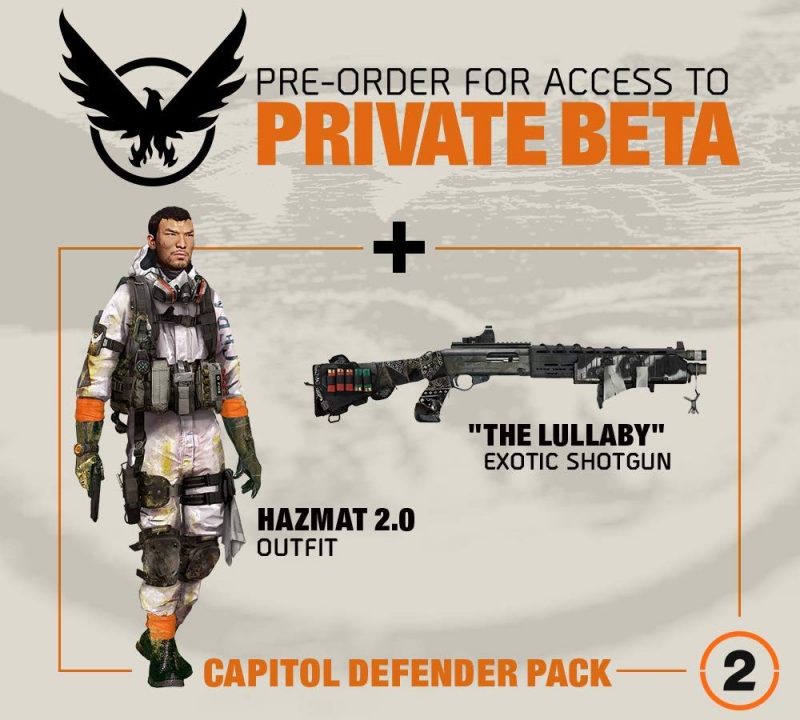 Pre-order The Division 2 for any platform to receive the following in-game bonuses:

Last but not least is a platform-wide offer for the PC. Pre-ordering digitally entitles you to a free copy of either Watch Dogs 2, Ghost Recon Wildlands, or Far Cry Primal:

Again, this is only valid for digital pre-orders from Ubisoft Store and authorized resellers – not retail copies. Available digitally, the Gold Edition comes with the following on top of the base game:

Add another ten dollars, and you have the retail Gold Steelbook Edition, which as you might’ve guessed includes all the digital Gold Edition content plus a Steelbook case. Again, the physical counterpart of the Ultimate Edition comes with all its digital content, but adds a Steelbook case on top. It’s worth a mention that it is GameStop-exclusive. Now we enter the territory of Ubisoft’s customary collector’s editions. The $189.99 Dark Zone Definitive Edition is available at retail and includes everything from the aforementioned Ultimate Edition, plus additional collectibles: Tom Clancy’s The Division 2 will be available for PlayStation 4, Xbox One, and Windows PCs on March 15, 2019.